A Deadly Lie that Appears as Truth

Lessons are all around us. Opening your eyes to them is a journey of healing and delightful mindfulness that helps us to distance ourselves from toxic beliefs and behaviors in order to address the underlying issues effectively. Here is one such metaphoric lesson from nature: 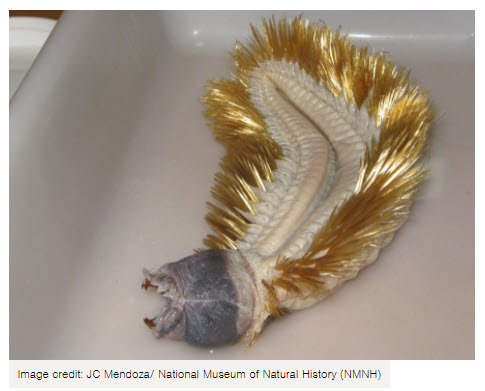 This horrifying worm has two elements going for it that create “cognitive dissonance” when looking at it.

On one hand, it’s beautiful and promises value by its golden appearance. But, take a look at the jaws which are vicious and deadly.

It is named “Eulagisca Gigantea”.

This horrifying worm has two elements going for it that create  “cognitive dissonance” while observing its physical appearance. The shimmering gold bristles sparkle in the light and attract attention. You might say that the gold gives the appearance of something desirable and true.

With an eye on the beauty of this worm, one would not be paying attention to the vicious jaws that are hidden at the end of its body. These jaws are actually connected to a throat that will extend out a short distance to connect and feed. This is the danger that comes with a false truth which is usually implanted at a young age and then reaches into the future of adulthood, draining the life out of its host.

For the purpose of this metaphor, this worm is representing FALSE TRUTHS that we believe. There is beauty in what appears to be value in the golden bristles, and an attractive pattern of movement when the worm is in action.

False truths appear as though they truly do have value and something to be regarded when received. Our nature is to embrace the value of these false messages without fully comprehending the wholeness of the message.

When we listen to a message that feels like truth but creates pain or sorrow, we have cognitive dissonance. We believe two opposing things at the same time, and experience conflicting thoughts in our minds. In order to maintain any semblance of balance, we will default to embrace one of the beliefs over the other, but a conflict will always rise up as they oppose each other.

False lies are presented to us in an unending flow of messages that if left unchecked, become a belief that we live by. Common false truths are not always taught but are caught by way of observing others who are living through their false truths. False “truths” are reinforced in a steady flow through social media, advertising, and political or religious messages that are delivered with a purpose to control and manipulate. (Be careful to understand the difference between religious messages versus spiritual relationship with God.)

These messages have to do with your worth. Whether they address your skin color, your personality style, talents, skills, the way you talk or sing, what you do or do not know … the message is “not good enough”.

When this message is never noticed, let alone questioned, it affects everything that we do and are afraid to do. Our soul intuitively knows differently and rises up when our mind embraces this message.

The way we can know if this lie is present is by noticing patterns of anger, lashing out, sensitivity to offenses, anxiety, fears, and even physical ailments that result in issues such as insomnia and disease.

Our soul knows we have value. We know our own hearts and motives. But the temptation to believe what we fear the most (I’m not worthy) battles with what our hearts know, which creates anxiety, double-mindedness, indecision, and more. This is where depression, hopelessness, and despair thrive. In order to find balance, we will either embrace our value and stop listening to the lies, or we will embrace the lie and give up.

If you’ve found yourself fighting this cognitive dissonance or are in a place of paralysis, check out this EMERGENCY TOOLBOX FOR WHEN YOU CAN’T THINK.

Here is the worm in nature

What other metaphors can you see, just from this one nature example?

Share your insights and comments below. Here’s a couple of questions that will help you think metaphorically.

Now apply your answers to human behavior, in yourself, or from observing others.

This site uses Akismet to reduce spam. Learn how your comment data is processed.